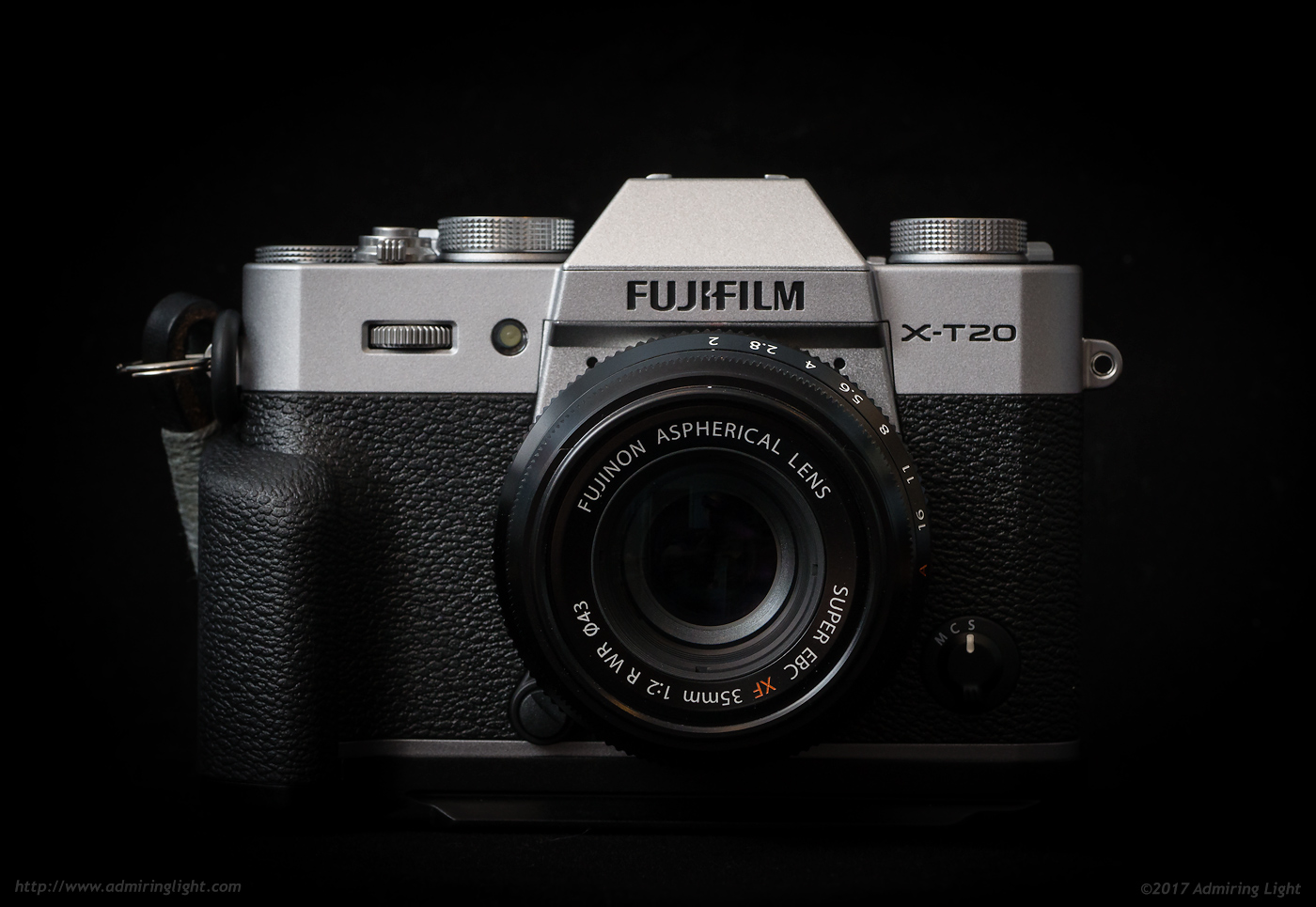 Hot on the heels of my (somewhat late) X-T2 review comes the review of its little brother, the X-T20. The X-T20 is the successor to Fuji’s X-T10, which was released almost two years ago.  The X-T10 proved to be a very capable body with nearly all the features of the X-T1 in a smaller package. The X-T20 follows that same mold, but with enough new features to be both a worthy upgrade for X-T10 owners and a real viable alternative for potential X-T2 buyers who may not want to spend the $1,600 asking price for Fuji’s flagship camera.  The X-T20 is priced at just $899 for the body only, with two kits available at $999 for the camera body with the XC 16-50mm lens, and $1199 for the body with XF 18-55mm lens. Is the X-T20 an X-T2 in a smaller package?  Let’s find out…

The X-T20 shares the same exterior body as the X-T10 that preceded it.  This means that all the positives and negatives I had to say about the X-T10 are still present here on the X-T20.  The body is a shrunken version of the X-T2 style, with a DSLR styled body with center EVF, in a very compact package.  The X-T20 is available in both silver and black, and my copy is the silver version.  The camera looks great in my opinion, but that is a very subjective thing. It’s a solidly constructed body made of a mix of composites and metal, with a full metal top and bottom plate. While it lacks the X-T2’s weather sealing, it otherwise fits into the X-T series very well with a high-end build quality.

There is no flex anywhere in the body, and it feels reassuringly solid. The small contoured grip on the front provides a reasonable hold on the camera when using the smaller lenses in the Fuji lineup. The biggest downside to the grip is the positioning of the rear thumb rest. That thumb rest is just a bit too far to the right, which causes the camera to pull left and down when holding the camera with my normal grip. When using larger Fuji lenses, the built-in grip isn’t particularly adequate, and you’ll definitely want to support the camera by the lens in these cases (which is the best way to hand hold a camera with large lens anyway).

I purchased the MHG-XT10 metal hand grip for my X-T20, and it makes a very noticeable improvement in handling for the camera with bigger lenses. It’s still not quite as comfortable as the X-T2’s grip, but the improvement in handling is worth the asking price for the grip, and I plan on leaving it attached more or less permanently on my X-T20. It’s worth noting that the metal hand grip is ever so slightly too tight on the left side of the camera body, and it has caused a small mark in the silver finish of the base at that location. As I plan on leaving the grip on all the time, it’s not a big deal to me, but it’s something Fuji should fix.

The X-T20 has the same overall button and control placement as the X-T10 with a few minor changes. Fuji has removed the movie record button entirely, moving movie control to a dedicated place on the drive mode dial with control moved to the shutter button. The Fn button, which resided in the lower right corner of the rear of the X-T10 has now moved to where the movie record button used to be.  That Fn button was a bit hard to reach on the X-T10, so the better placement of the button on the X-T20 is a welcome change.  The buttons on the rear of the camera have a nice positive clicking action, but those on the top plate are a bit mushy and small.  In all, though, all the controls are very easily accessed and within easy reach during shooting.

It’s a fluid scheme and one of the things I love about Fuji controls.  However, the X-T20 also features a full Auto mode that can be accessed with a flip of a switch. When Auto is engaged, none of the dials serve any purpose and the camera will simply attempt to use all the best settings.  It’s worth noting that RAW is not available in the Auto mode.

A great feature of more recent Fuji bodies, including the X-T20 is a functional Auto ISO in manual mode with exposure compensation.  As such, you can select your shutter speed and aperture, adjust exposure via the exposure compensation dial, and let the ISO float to make up those exposure changes.  This is really useful if you find yourself in dark environments and want to adjust the minimum shutter speed on the fly, but don’t want to change it via the ISO menu.  Now just a quick flick of the shutter speed dial and you’ve got it.  It’s also extremely useful for video shooting, where you want shutter speed to stay constant.

Another great new feature that comes first to the X-T20 (but will be added to the X-Pro 2 and X-T2 with a firmware update later this month) is the ability to select ‘Auto’ as the shutter speed in Auto ISO.  When this is selected, the camera will choose a shutter speed based on the focal length. Specifically, 1 / (FL*1.5)s.

On the left side of the camera sits a dedicated Drive dial.  While I’d probably prefer ISO be in this position, the Drive Mode dial is very convenient and makes it quick and easy to switch between continuous shooting, single shot, movie mode, advanced filters, panorama modes and two different bracketing setups, which the user can specify in the menus.  Next to the Drive Mode dial is the release for the integral pop-up flash, which deploys with almost alarming speed and sureness.

The rear of the X-T20 is again very similar to that of the X-T2, but a bit more simplified.  The dials on the X-T20 are pressable, and pressing the rear dial activates the focus assist function, like it does on all other Fuji X bodies outside of the X-T1. The AEL and AFL buttons flank the rear dial.  On the top left of the rear, the play and trash buttons can be found, and the View Mode control for the EVF and rear screen is prominently featured beside the viewfinder.

The biggest new feature with regards to camera control is the new rear touch screen.  This is the second X-Series body to feature a touch screen, but the first with interchangeable lenses. While the X-T2 and X-Pro2 both included the rather excellent focus stick for switching between focus points, the X-T20 loses that control but gains back some of that quick selection capability with the rear touch screen. A quick touch allows you to instantly change the focus point, or change the focus point and then take the picture.  The touch screen can also be used during image review in the same manner as with a modern smartphone. Slide between images and pinch to zoom both work well. If you don’t like using the touch screen, you can, of course, disable it. One feature that is missing, but I hope will eventually make it to the X-T20 via firmware update, is a way to reposition the AF point with the touch screen while using the EVF. Olympus and Panasonic cameras both have this capability, and the rear screen can be used as a touch-pad for AF point positioning.  I love this feature on my OM-D E-M10 Mark II and hope that the X-T20 gains this capability soon. In any case, I’m glad to see Fuji start providing touch capability in the X-Series, and hope it continues with new bodies to come.

The X-T20’s controls are well laid out and allow for a high level of customizability.  All four of the four-way directional buttons can be assigned a custom function, as can the Fn button, the movie record button and the pressing function of the rear dial.  In all, that’s seven programmable buttons, which allow you to set the camera up to your liking. These buttons, in addition to the Q menu, which allows access to many other commonly used functions make trips to the menu for settings changes a rare occurrence. Programming the buttons can be done either through the menu system or by long pressing on the button in question, which will immediately bring you to the custom settings for that button. The last physical control on the camera is the focus mode selector switch, which sits on the front left of the camera for easy access with your left hand.

Going back to the menus, the Q menu is laid out similar to all the other X-Series cameras, and can be customized to your needs. The Q menu allows you to quickly change ISO, JPEG parameters, self timer settings, AF mode, flash mode and quick sets. The X-T20 also inherits the same upgraded menu system that first debuted on the X-Pro2.  It’s a very well laid out menu system with settings grouped in logical pages.  Unfortunately, the touch screen can’t be used to navigate menus.