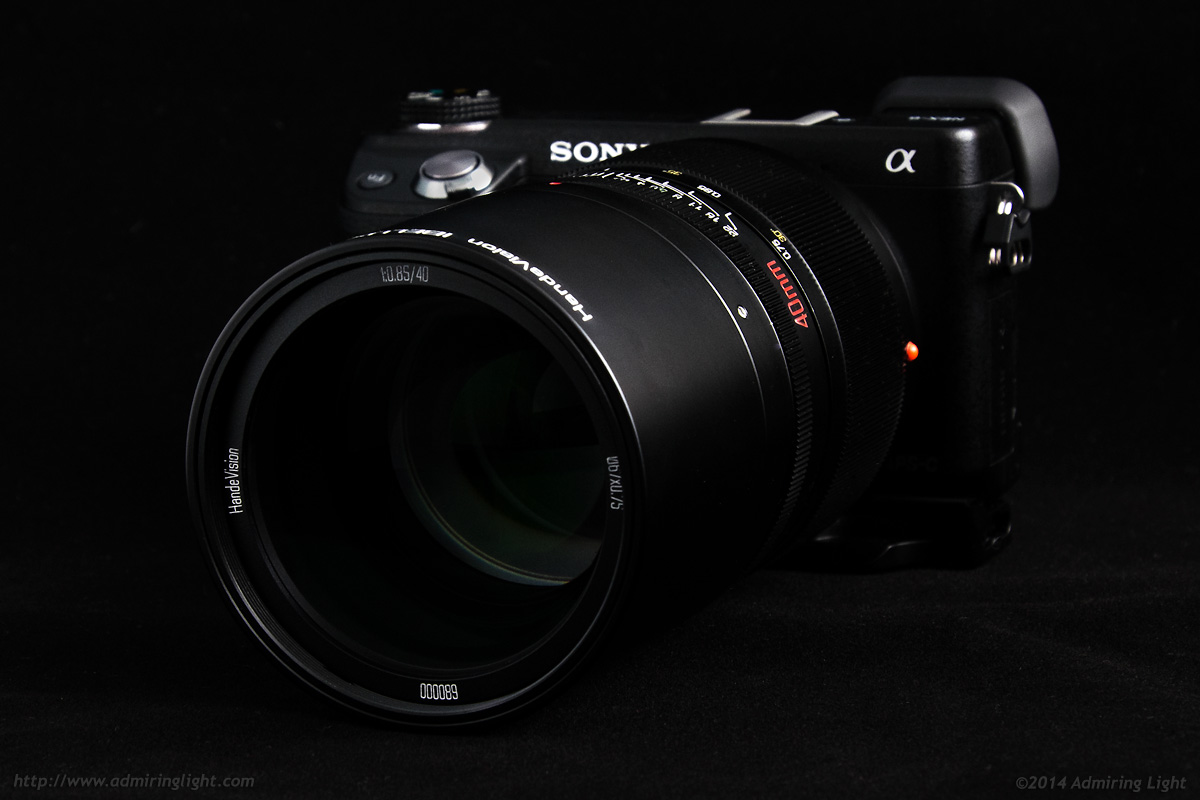 Image quality for a lens like this is somewhat difficult to evaluate in a comparative sense because there are no other f/0.85 lenses on the market.  However, I think given the price, my expectations are that the lens should perform at least as good as the cheaper and smaller f/0.95 lenses in the same range.  Unfortunately, the Ibelux 40mm doesn’t quite hit that mark.

The Ibelux 40mm f/0.85 is able to produce images with decent, though not stellar, central image sharpness wide open.  When focused close up to around 6 feet away, there is good fine detail reproduced over the central 50% of the frame at f/0.85.  As you move towards the edges, sharpness drops off and the edges and corners are quite soft. This level of performance isn’t bad for such an extreme design, but I was rather disappointed in how the lens performed stopped down and at further distances.  As you focus further away, the lens is much softer wide open, with very little detail when focused near infinity at f/0.85.

Stopping down, unfortunately, doesn’t sharpen the lens up as much as you would expect from a $2100 lens.  The center gets very sharp indeed at smaller apertures, but the edges and corners still lag a fair bit, especially at further distances.  There is very pronounced field curvature near infinity, such that the field of focus bends sharply towards the viewer at the edges.  My review sample also had some slight decentering of the optics that was visible by the right edge showing stronger field curvature than the left edge when focused at infinity (though this didn’t come into play much at closer distances).  Overall, I expected better for a lens in this price class.

The Ibelux 40mm f/0.85 is a mixed bag with regards to bokeh.  In that ‘sweet spot’ focus range of minimum focus distance to about 6 feet, the bokeh is frankly gorgeous.  Silky smooth and with a slight swirly character, the lens can produce simply beautifully images in this focus range, provided you are a fan of that lower contrast fade into the background look.  While point light sources wide open are rendered in a sort of ‘gumdrop’ shape, it can still be rather nice. For portrait subjects and the right detail subjects, I find this look quite stunning and unique.

Foreground bokeh, on the other hand, can be rather harsh, with strong magenta fringing around specular highlights and bright edges and nervousness.  Also, very funky patterns can take shape with point light sources in the foreground (which you can see in one of the sample images of people walking through trees with lights on them.) Similarly, as you focus further away, this nervousness makes its way into the background.  Some may like this look, but it’s not to my taste.  If you concentrate on the types of shots this lens is best at, though, you’ll find it works quite well in this department.  The lens has an 10 bladed aperture, which keeps out of focus highlights round when stopped down as well.

At wide apertures, the Ibelux 40mm f/0.85 suffers from rather severe spherical aberration, which results in a low-contrast ‘glow’ throughout the images.  This significantly reduces image contrast, while still showing the fine detail through.  This look can be extremely flattering in some situations, and decidedly bad in other situations, though for the most part I don’t mind it.  Images remain very low contrast at f/1.0 and start to gain contrast as we pass f/1.4.  Stopped down, the lens produces nice punchy contrast and good color response, though it’s nothing out of the ordinary.

The lens is also very prone to certain types of chromatic aberration.  There is lateral and longitudinal CA present in the images and the 40mm f/0.85 is extremely prone to purple fringing at the widest apertures in high contrast situations.  It’s actually among the worst lenses I’ve ever shot with regards to purple fringing. In the right circumstances, it can bleed over the subject.  Care must be taken in the situations where this is present to avoid giant purple blobs around the edges.  For most indoor work, though, it doesn’t pose much of a problem.

The Ibelux 40mm has some barrel distortion, which doesn’t pose a problem in most circumstances, but can be quite visible if you have a lot of straight lines.  It’s fairly easy to correct in most post-processing workflows.

One area that the 40mm f/0.85 fares very poorly is in vignetting.  While you would expect an ultra-fast lens like this to show some notable corner shading, at f/0.85, the Ibelux takes it to the max.  The corners are VERY dark.  In the right circumstances, this can be a great look, but all too often, it’s just too much.  I’m someone who likes a bit of vignetting in my images, but not to the level this lens produces.  At f/0.85, it’s very difficult to correct all the vignetting.  Even a +100 adjustment in Lightroom leaves very visibly dark corners.  Note the wide open vignetting in the shot of the Ferris wheel.  Stopping down to f/2 eliminates the majority of the vignetting, however, and there’s none to be seen at small apertures.

The lens is mediocre against bright light. While some flare ghosts can definitely be introduced if the sun is in the frame, it does OK in outdoor daytime shooting.  However, when shooting at night, if you have light sources aimed into the lens, it is quite easy to induce multiple rings of flare throughout the frame.  If used artistically, this can be great, but you really need to watch the angle sometimes to avoid it. Luckily, it’s very easy to see in the viewfinder, and often a very minor adjustment in position can get rid of it.

Looking at the above analysis, you may be thinking ‘this lens isn’t very good.’  In some respects, many respects actually, that would be a fair assessment.  It’s average at best stopped down and at a distance, and while it’s fairly good wide open for such a fast lens, it’s not stunning by any real empirical measure.  It’s very good ‘given the f/0.85 aperture.’  That caveat is one that I don’t have a problem making for a lot of older fast lenses.  It’s a caveat I have a harder time making for something new at this price point.

However, you don’t buy this lens to shoot it stopped down. If you do, I question your sanity.  There are tons of lenses in this range that are a fraction of the weight and price that will outperform this lens at f/2.8 and smaller.  You buy this lens to use wide open.  And, provided you aren’t using it wide open for distant subjects, it creates a very unique and often beautiful rendering when used for people shots or other closer subjects.  The bokeh is gorgeous (in most cases), the low contrast glow and vignetting can create unique and intriguing images that can’t really be replicated.  In that respect, the lens succeeds.

That said, for a new lens that retails for over two thousand dollars, and has major size and weight penalties, I can’t really give it a pass because of a nice look in a very specific set of circumstances.  It just doesn’t meet expectations, or really even approach them in my opinion.  The bigger problem is that there are smaller, lighter and far less expensive lenses that perform better than this one.  It doesn’t perform nearly as well as Voigtländer’s f/0.95 lenses for Micro 4/3, and in most cases, doesn’t outperform my Canon FL 55mm f/1.2 when put on a Metabones SpeedBooster (a 39mm f/0.9 combination)  (See my comparison here). There simply isn’t the performance to justify the price that this lens costs.

This is not a detriment of the lens, but it’s worth noting for those of you shooting with Sony’s a6000.  While I love my a6000, something in the way the sensor is constructed or the circuitry routed causes banding when there are wide ray angles from the lens, such as with an ultra-wide aperture lens such as the Ibelux.  (It’s also been reported to occur when shooting bright backlit subjects, which may also expose the circuitry to these situations).  At base ISO, clear banding can be seen in the background on the a6000 when shooting at f/0.85 or f/1.0.  By f/1.4, the banding is mostly gone and it’s completely gone by f/2.  At higher ISOs, the banding is obscured by fine noise as well, so it’s not a big deal when shooting in very low light.

Again, this is not a problem with the lens, but it’s worth noting if you are considering this lens to use on an a6000.  After I saw the banding on every wide open shot the first day with the lens, I shot predominantly with the lens on my NEX-6, which does not show banding at wide apertures.  For the image samples with the a6000 on the next page, banding reduction has been performed using Topaz Denoise.