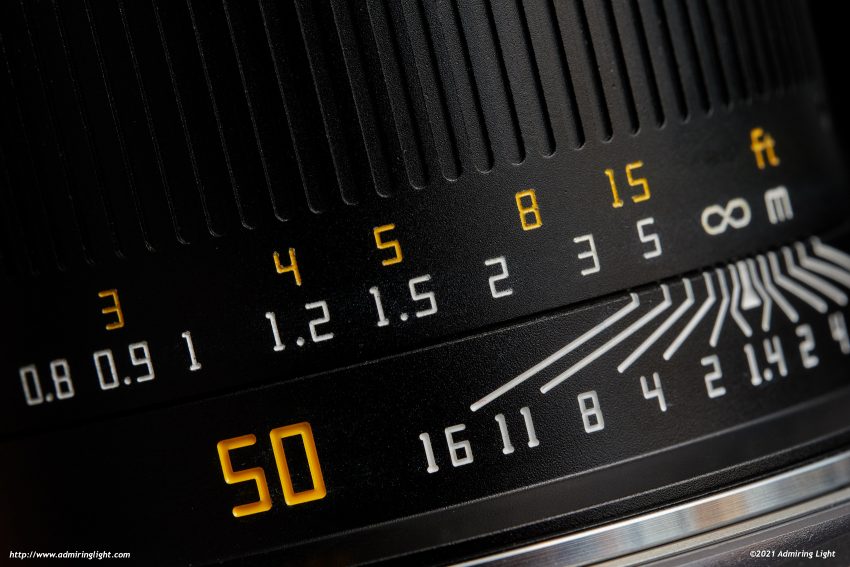 With a budget price of $239, you’d expect there to be a few optical compromises with a lens such as this, and there are. However, the 50mm f/1.4 ASPH is a great example of intelligent lens design, as the compromises are pushed to situations that will be less commonly experienced by the photographer. As you’ll see below, the lens behaves differently at different focus distances and apertures: it’s not a near-perfectly corrected optic like the Voigtländer 50mm f/2 APO Lanthar. However, the areas where it is strong correlate to the situations where one is most likely to use the lens in that way. Correspondingly, where the lens is weak, it is usually in situations that the user is unlikely to regularly encounter. The result is an extremely compelling lens.

First, let’s take a look at how the lens performs at wide apertures. 50mm lenses are often used for environmental portraiture or isolating details when using a wide aperture. In the focus range where one is most likely to do this, the TTArtisan 50mm f/1.4 performs very well. The lens is optimized for closer focus distances when shooting at the widest apertures. As such, when shooting between about 0.7m and 3m, you’ll find good to very good sharpness over the central 70% of the frame or so, with some softness at the edges. Half body portraits, isolated details and such really pop with good resolution and lovely falloff to blur. Stopping down to f/2 increases sharpness across the majority of the frame, and by f/4 or f/5.6, the lens is tack sharp corner to corner.

The shot below was taken at f/1.4 at a distance of around 1.3m, showing that good sharpness even on the high resolution R5, as you can see in the 100% crop of the focus area here.

One of the changes made to the mirrorless version of the lens from the Leica M version is the ability to focus closer than the 0.7m. That additional ability comes with a modest expense. At its very closest focus distances of 0.5-0.6m, some spherical aberration starts to raise its head, which affects sharpness. As such, near MFD, the lens has a soft glow at f/1.4 that is almost completely resolved by f/2. When shooting very close up, I’d recommend stopping it down a little.

When focusing towards infinity, the lens is quite soft wide open, with spherical aberration showing up in abundance. It’s also got extremely high coma, so the lens is not going to be a good choice for astrophotography. As mentioned earlier, though…this is one of those situations where it doesn’t really matter that the lens isn’t sharp wide open at far distances. It’s very rare that one needs high resolution at a distance at very wide apertures on a lens such as this. However, stopping the lens down again results in very good to excellent sharpness across the entire image frame. As such, the 50mm f/1.4 is a great choice for landscape photography where edge to edge resolution is important.

Overall, this is a very strong performance. At portrait distances, the lens is very good right from f/1.4, and it shows excellent performance at small apertures for landscape use. It’s rare that a budget 50mm can do both of these things well. Excellent job here.

A fast 50mm lens is often used to isolate the subject and blur out the background, and as such, bokeh is very important in such a lens. Again, the TTArtisan 50mm f/1.4 displays a dual personality with regards to bokeh, depending on the focus distance.

A lot of classic 50mm lenses have blur that is mediocre at best, and even some more modern 50mm lenses have less than wonderful bokeh. This is where the TTArtisan 50mm f/1.4 shines in my opinion. I absolutely love the way the TTArtisan 50mm f/1.4 draws, and the bokeh is beautiful to my eye in the majority of situations where you’ll be isolating subjects. From minimum focus distance to around 3m, the bokeh has a bit of character, but is overall quite smooth, and in my opinion, gorgeous. There can be some onion rings visible in specular highlights from the aspherical element, but it’s minor. The bokeh is in many ways reminiscent of one of my favorite lenses of all time, the Voigtländer 40mm f/1.2.

The lens has 12 aperture blades, and the mechanism that closes them keeps them precisely aligned, so the aperture opening remains consistent, symmetric and as round as possible given the blade shape. The blades do form a slight 12-sided hypocycloid shape that is visible in stopped down highlights, though with 12 blades, the effect is subtle.

When focused on more distant subjects beyond about 3m, the bokeh does roughen up quite a lot, with a bright ring on highlights that is multicolored due to uncorrected spherical and chromatic aberration. Combined with the lower wide open sharpness at greater distances, it isn’t going to be a great lens for distant subject isolation, but in my day-to-day use, this was rarely a situation I found myself in.

One thing to keep in mind when shooting with an f/1.4 lens outside is that electronic first curtain shutter can negatively affect bokeh when used at very high shutter speeds. As such, it’s best to switch to full mechanical or electronic shutter when shooting in bright light at wide apertures. I forgot to do this a few times, and I have noted this in the image samples by placing (EFCS) in the caption.

At wide apertures in that 0.7-3m sweet spot, contrast is moderate, and lays a great foundation for processing to taste. Very close up or more distant shots at f/1.4 show spherical aberrations which reduce contrast. When shooting at smaller apertures, the lens shows strong punchy contrast and rich color. The lens is biased a bit on the warm side as far as base color balance is concerned, but not overly so. The contrast profile is such that portraits look very nice and landscape images look great.

The 50mm f/1.4 ASPH shows good control of lateral chromatic aberration, with minimal lateral CA visible at the edges that is easily cleaned up if desired, though most won’t notice it. At wide apertures, the lens can show typical longitudinal CA, with a magenta fringe in front of the focus point and a green fringe behind. This is harder to clean up, but the amount shown isn’t excessive compared to other lenses of this type, and it only requires correction when shooting subjects with very high contrast. Purple fringing can also appear on very high contrast edges wide open, inline with many other fast 50mm lenses. This disappears upon stopping down a couple of stops.

The TTArtisan 50mm f/1.4 shows mild to moderate pincushion distortion that for the most part you won’t notice in day to day shooting. If shooting subjects with a lot of straight lines, the distortion is almost completely fixed by a -3 or -4 pincushion correction in Lightroom.

Now we come to probably the biggest optical issue with the lens, which is flare control. High quality lens coatings are expensive, and so it’s not surprising that the 50mm f/1.4 ASPH has a few issues when it comes to flare. When shooting directly into the sun, the lens produces a rainbow-colored ring flare when shot wide open. This can be used for artistic effect, but is very obtrusive when it isn’t desired. Thankfully stopping down to just f/1.7 eliminates the ring flare entirely, as you can see in the examples below.

However, I also found that the lens can produce several large green ghosts when shot at smaller apertures, especially when the sun is placed near the edges of the frame, which can cause issues with landscape use with the sun in frame. The shot below shows this at its worst.

The TTArtisan 50mm also shows reduced contrast when used without a hood with the sun out of frame, though I actually quite love the vintage classic look this can display, such as in the shot below.

When Bastian K. of phillipreeve.net reviewed the Sony E mount version of this lens, he encountered a sort of shaded horizontal line in the photos from lens flare. However, I did not experience that at all in my time with the lens, so I am wondering if that artifact is more an interaction between lens and body on some systems rather than something inherent with the lens.

One other thing to note is that the lens does produce very nicely rendered sunstars on point light sources. They are well defined starting at around f/8, and feature spokes of consistent length due to the consistency of the aperture mechanism.

The 50mm f/1.4 shows typical vignetting performance for fast mirrorless lenses, with moderate vignetting wide open that eases upon stopping down. The vignetting never truly goes away, but it’s minor beyond about f/2.8.

Overall, I really enjoy the way this lens draws. It is reasonably sharp wide open at the distances where it matters, very sharp stopped down and produces wonderful background blur and a drawing style that I really enjoy. This kind of optical quality for this price is really impressive.